Why I Joined Cube: A Product Person’s Perspective 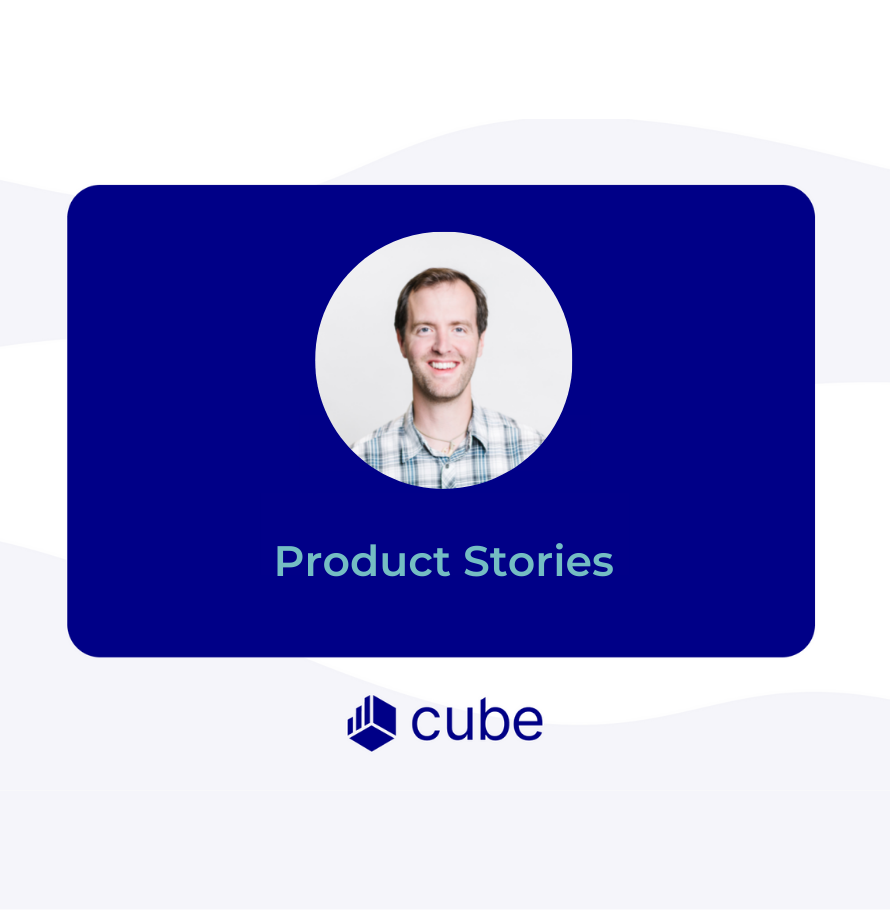 I’m now a few weeks into my new role as VP of Product for Cube. I’m super excited, and lots to do, but I thought I’d take the time to share a bit about why I’m here and my take on the road ahead for Cube and financial planning and analysis (FP&A) folks in general.

The Problem: Mechanics, not Analysis

I first became aware of Cube late last year as part of my weekly barrage of executive recruiting emails.

…Admittedly, a lot of those end up in inbox purgatory as part of my 17k+ unreads, but this one jumped out at me based on personal experiences and subsequent user empathy.

Back when I was at Dropbox, I spent more than my fair share of time collaborating with folks in the Strategic Finance (StratFin) team. Dropbox was, and is, a very metrics-aware organization, and some pretty elaborate growth models were the foundation for a lot of our strategic planning.

I couldn’t begin to tell you how many different scenarios and pivots I had of AARRR funnel metrics and global sales reports across various parts of the Dropbox product.

Our models were usually created and supported by folks in StratFin, and PMs like me would consume that info, update it with product-derived metrics, and manipulate it into many different scenarios in our planning.

For example, here’s some of the things we’d ask ourselves when planning a new initiative:

Everything I ever touched for those planning collaborations was a spreadsheet, and it all felt very manual. Heaven help you if there was a mistake in a formula somewhere, (“who forgot to put the $ in there to keep that column fixed!!”), or you had to adjust for a new dimension in the data (“uh-oh, we expanded our GTM team in APAC, and now we have enterprise sales numbers coming in from three new countries so now we gotta redo a bunch of stuff!!”). :-(

The people I knew in StratFin were super brilliant with impressive university degrees, but between them, PMs like me, and other business leaders, the amount of collective time spent on the mechanics of analysis, not the analysis itself, was staggering: back-of-napkin math puts the time invested annually in mechanics and troubleshooting equivalent to all the activity of a healthy Series A startup!

So, long story short, when Cube came across my inbox, I was intrigued.

But why Cube specifically? Well, I did my diligence, talked with former colleagues in the FP&A space, even got introduced to a couple other similar-phase startups also looking to do some good for these users. What I saw in Cube’s strategic approach was unique…

The Solution: Meet People Where They Already Are

As far as I can tell, everyone else trying to help FP&A professionals these days treats spreadsheets as the enemy.

There are good reasons for that: at its heart, a spreadsheet is just one big 2D grid that could hold ANYTHING, which often makes it potentially quite messy.

Furthermore, when one tries to use spreadsheets to model complex, multi-dimensional datasets, that complexity and opportunity for error gets exponentially multiplied. Anyone who has learned how to create pivot tables in Excel can appreciate at least some of these challenges.

Therefore, I can hardly blame software folks wanting to get away from spreadsheets and the challenge they introduce. Engineers don’t like messy problems; why not make something that is kinda like a spreadsheet, but has a lot more controls and guardrails built in for the purpose of deep FP&A work?

But frankly, I’ve heard similar arguments before, and have come to deeply believe that the most impactful solutions in B2B begin by meeting users where they are.

That was certainly the case with Dropbox—it wasn’t the first time people had thought about storing files in a central server somewhere; the magical thing Drew did was make that experience seamlessly integrated into where you already were messing with your files: you didn’t have to change your process or learn something new—things just suddenly got better.

(Turns out, that was actually quite hard to do well; I still remember meetings spent discussing our investments in the sync engine where a certain founder might be quoted as saying, “It seems like we’re climbing a mountain our competitors are choosing to drive around.”)

But in the end, this doing things the hard way IMHO proved worth it: it built the company’s initial success through user love and perceived simplicity, gave it a massive competitive moat that lasted for many years, and gave it a beachhead to expand into higher-level forms of collaboration and customer value.

Sure, there are things the company would probably do differently if it could do it all over again, but meeting users where they are certainly isn’t one of them ;-)

But how is any of that relevant for FP&A and the world of spreadsheets?

For those not familiar with the reality on the ground out there, I’ll reference a good article in the WSJ from last summer: Finance Chiefs Are Still Trying to Replace Excel With New Tools.

The truth is that a spreadsheet, kinda like a filesystem on your computer, is an incredibly powerful tool that has deeply embedded itself into the processes and collaborative workflows of FP&A teams—in large part due to its flexibility.

So…why would anyone want to give it up?

Most don’t: within the entire $100Bn TAM for FP&A, more than 80% of teams that try to replace spreadsheets return to them in the end, (Source: BPM Partners,The Pulse of Performance Management).

If one really wants to transform the lives of FP&A folk and those they work with at scale, it can’t be just building a better mousetrap for companies already purchasing a traditional EPM (Enterprise Performance Management) tool that often doesn’t even get used.

You’ll do a lot more good for a lot more businesses if you can help out users who still experience a lot of planning complexity, but don’t consider themselves to be a good fit for those monster systems or their more modern equivalents.

Is it Real? User Love

So at this point, it should be clear why I at least opened the recruiter email and accepted an intro call or two: I knew the challenges faced by FP&A are very real, and strategically, meeting these users where they are, in spreadsheets, made a lot of sense to me. But what got me from those observations to clicking my e-signature onto the proverbial Docusign?

I tend to put a lot of faith in not just what a company does, but how it makes its customers feel. Do they just find a product useful, or do they actually connect with it more emotionally—do they love it?

Within the FP&A space, I think we’ve established that there’s an incumbent to love, warts and all, and that’s the spreadsheet—quite typically Excel. And back to the Dropbox/filesystem comparison, I’ve observed over the years that...

When you give a customer a means to hold onto the best of what they love and make it better, that love rubs off on you very rapidly.

Probably the most convincing element of my interview process with Cube was the opportunity to listen to a few recorded sales calls with prospects.

There’s a magical moment in the Cube demo flow where a rep changes the title of some columns from “Planned” to “Actual” in an Excel spreadsheet, presses a button, and suddenly all the relevant numbers in the cells beneath the new “Actual” headers update to match actuals data in a backend Netsuite system. (Not just a parlor trick BTW—there’s even more complex stuff Cube does, but this scenario does legit show well.)

Expletives of amazement often ensue; one prospect was on the brink of tears with how much time and energy this was going to save her and her team.

And once these prospects become customers…while I can’t publicly share every stat we’ve got just yet, it’s fair to say that NPS is among the best I’ve seen in my career, and monthly engagement is very, very strong. Not to say there isn’t a lot we need to do to keep users happy, (why bother hiring me otherwise?), but the foundation is there in the couple short years of Cube’s existence.

But it doesn’t end there…

How one can build on that love and take it somewhere was the final element in my decision to join Cube.

As alluded to in my personal anecdote about working with StratFin teams, these are not isolated single player or even single team use cases—it’s not “just” about copying a few numbers around to save a few minutes here and there for an elite few.

The jobs spreadsheets perform in many organizations are profoundly collaborative. They are surfaces for teams to pull together data from a variety of disparate sources, then collectively discuss, manipulate, and act upon. They bring together people of different seniority, different departments, different companies, and different geographies to work together and make decisions.

That’s partly why they’re so hard to get rid of—everyone knows what to do with them, (even if they’re a bit of a hack at it)!

So while it’s hard to predict at this point in the Cube journey exactly where it will all go, I strongly believe there is a boundless supply of customer needs we can help with. All based on a foundation of love, and meeting users where they are to solve important problems—we can build out from here!

What more could a product person like me want?

P.S. If you're a Cube user and you want to tell me what works, what doesn't, what you love, what you wish you could improve, or anything in-between, I'd love for you to pop those thoughts into an email at product-feedback@cubesoftware.com.