To Grow or to Profit: The Rule of 40 Question 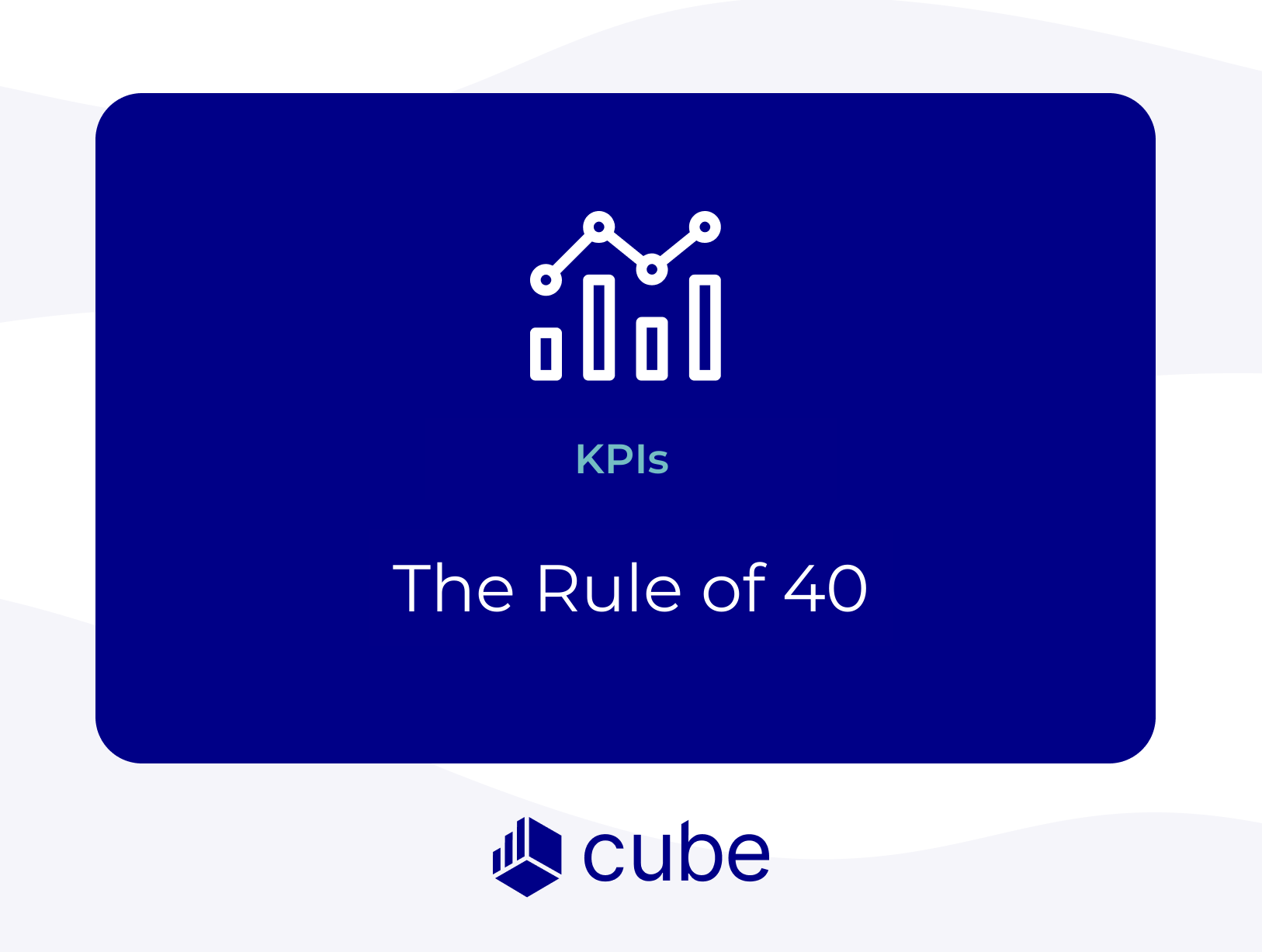 The Rule of 40 has become a popular metric used in the SaaS industry for evaluating business sustainability. It uses a combination of profit margin and growth rate to showcase how well the organization is balancing its growth and profitability. Plus, it helps identify which factor the business should focus on at any given stage.

Companies strive to hit a goal of 40%. As teams generally aim for either heavy growth or substantial profits, this measure seeks a kind of harmony among the two figures.

While the Rule of 40 cannot discern whether a company is experiencing enough growth or sufficient profitability, it can be used to evaluate the balance of the two measurements. It’s used as an effective standard for reviewing the performance of SaaS industry companies as it creates an “apples to apples” metric to use across the board. Where the metric gets complicated is with the profit margin calculation, as there is no agreed-upon standard for determining this data. However, there are several options that are covered later in this article.

SaaS companies often use the Rule of 40 metric as a way to align their focus in regards to profitability and growth. In the early stages of a business, rapid growth may be the primary goal. Getting the word out about the new service and recruiting a large number of subscribers helps get cash in the door so the company can continue on the road to success.

As the company leaves the “honeymoon phase” and transitions into an established, mature business, the goals begin to shift. With a strong customer base established, the business knows that growth is slowing and that curve will continue to flatten. Less growth means a lower Rule of 40 metric. To keep the Rule of 40 metric around the 40% mark, leadership knows that they must pick up the slack by prioritizing profitability.

Calculating the rule of 40

The formula for the Rule of 40 is as follows:

As stated before, the goal is to maintain a metric of around 40%. Companies, specifically in the SaaS industry, that can maintain a healthy balance of growth and profitability both as they ramp up in the beginning and as they mature stand the greatest chance at ongoing success. While the metric seems easy enough to calculate, determining which figures to use for growth rate and profitability can create some confusion.

Netflix went public back in mid 2002. What started as a delivery service where subscribers could choose several movies each month for delivery to their doorstep grew into a full-fledged entertainment streaming service, effectively ending the era of movie rental chain stores. While competitors like Redbox attempted to keep pace and offer consumers a quick, easy way to cheaply rent and watch the movies that they wanted, Netflix blazed a trail to the new normal which we are all accustomed to today.

Now, with competitors like Disney+ and Hulu popping up at every corner, how is Netflix stacking up when it comes to the Rule of 40? Let’s look at their 2019 figures.

Netflix had a net profit margin of 9.26% as of December 31, 2019. They also reported a growth rate of 31% in their Q4 shareholder letter. Unsurprisingly, the company is right on pace with the Rule of 40 metric as the two figures add up to almost exactly 40%. What’s surprising is that many mature companies shift from a focus on growth towards a focus on profit as the years pass; Netflix has kept a strong growth rate even as a well-established business.

Perhaps the fierce competition surrounding the streaming service industry has forced them to maintain a low price-point, encouraging them to focus on growing in new ways. No matter the case, Netflix is an innovative company that has successfully navigated the changing waters of consumer behavior while arguably driving trends in their favor. Their ability to meet the Rule of 40 metric should come as no surprise.

To keep the growth rate consistent across the board, it’s best to use GAAP revenue in the calculation. GAAP revenue is very standard and can’t (or, rather, shouldn’t) be skewed. Thus, calculating the year-over-year percent change in GAAP revenue creates consistency in the Rule of 40 calculation.

The profitability margin figure muddies the proverbial waters in the Rule of 40. While using a GAAP standard for measuring the growth rate is easy, there is no such standard in profitability. Here are some options that can be used:

Without an agreed-upon measurement, there isn’t a “right answer” when deciding which figure to use in calculating the Rule of 40. The important part is to understand that each figure will yield a different result.

A standard way to look at profitability is to use EBITDA while excluding stock-based compensation costs. This provides a level playing field when analyzing and comparing figures by stripping away interest from debt, depreciation of intangible assets, and differences in taxation and accounting policies to approximate its operating cash flows. By excluding stock-based compensation, companies also eliminate large swings that can happen during peak bonus season.

Improving the rule of 40 metric

As a company matures, the balance between profitability and growth shifts. Growth slows and, in order to keep pace with the Rule of 40, profitability needs to pick up the slack. Increasing efficiencies throughout the organization can help create the profitability figures required for a favorable Rule of 40 ratio.

As the early phases of business wind down, engineering teams begin juggling the demands for new features and the maintenance requirements to keep end-customer experiences positive. Operations also experience a similar shift as the hectic stages of growth reach a plateau and employees can objectively see the flaws in their processes.

It’s at this time that having a clear set of priorities is crucial. Similarly, it’s important to understand how teams are dividing their time and what tasks are using up the most resources. Where possible, encourage each team to dedicate the majority of their time to the established priorities in order to increase efficiencies and, thus, profitability. This may mean putting an emphasis on streamlining processes, setting up automation, or reducing existing duplication.

As time progresses, the number of new customers signing up for a company’s service will slow. When this happens, focusing on customer retention efforts can help maintain a profitable business. It’s costly to rely on, seek out, and sign on new customers as a revenue strategy. By focusing on building a great experience for the existing customer base, the business can reduce its expenses for new customer efforts and increase its profitability.

Increase the value delivered to existing customers and support their business success in any way possible. By investing in customers and providing strategic solutions that create efficiencies within their business, customers move from buyers to brand ambassadors. As their loyalty grows, it becomes easier to expand on the products or services they’re willing to purchase.

Once a strong customer base is established and the stages of intense growth are in the past, developing new products will help bring profitability figures up. Instead of focusing solely on the target market for the core product, expanding the business’s reach into adjacent markets can help grow the customer base while also increasing what existing customers purchase.

R&D is responsible for some of the large growth out of the gate as their discoveries help fuel audience engagement and excitement for the product. While the associated costs play a crucial role in the beginning stages of a start-up, substantial breakthroughs dwindle as the company matures. As such, it’s important to know when to reduce the R&D budget. Yes, developing new features and differentiating the existing product line can help increase growth and profitability, but reigning in these expenses becomes necessary as those efforts become less impactful on the bottom line.

The Rule of 40 helps SaaS companies strike balance between profitability and growth. While growth can carry the metric to success at the beginning stages of a start-up, profitability has big shoes to fill as the business matures. By tracking this metric over time, SaaS companies can understand whether to focus attention on profitability or growth. From there, it’s easier to create a strategic plan for the organization to rally behind as it steps into the next business phase.